8 Ball In The Wind

I have been replacing some of my camping gear with newer items that are either smaller, lighter in weight, or in better condition than my older camping gear for use on the trip.  Today, a new camp axe arrived, and along with the folding entrenching tool, small sheath knife, and LED folding lantern, my new gear is pretty well complete.  I am planning on purchasing a military mess kit for cooking, and a small single burner hiking stove.  But other than that, I pretty much have everything I am going to need.  My sleeping bag and tent are in plenty of good enough condition to use for this trip.  Especially since I plan on staying in Motel 6's once we hit the Great Plains.  I just can't see camping with no shade in late Summer on the Great Plains and getting roasted in the tent unnecessarily.

I am planning on using my old Navy seabag to carry most of what I am taking that won't fit in the saddlebags, and I still have a Kuryakin T Bag that will mount on the back of the bike.   Between the seabag and the T Bag, I can't think of much else I will be needing to pack for this trip.  The Navy trained me long ago how to fold and stow my clothes and gear effectively.

Since this is a bike trip and not a car trip, weight is a serious factor.  The last thing I want to do is to overload the bike taking things I won't really need.  So I will continue to go over the list of gear between now and next Summer as I get things ready to go.  Eliminating the items I won't really need and lightening the load for things that I will.

Since we will only have a very few days to visit family I haven't seen in nearly five decades, I want to pack as light as possible so that I will have the option of pushing on further some days during the ride.  I really would prefer not to be making 12-14 hour days, but pressing 8-10 may just be in the cards.  But we won't know for sure until the time comes, and we are actually on the road each day.  I just want to keep as many options open as possible.  As it is, most of this trip will be made on Interstate Freeways.  As much as I find them boring, we just don't have the time available to make the trip taking two-lane highways for the entire 5,000 miles plus distance.  If we weren't restricted to only a fourteen-day time frame, things would be different I am sure.  But it is what it is, and we will just have to deal with it.

While I have the rough route laid out, we may have to adapt it due to unforeseen circumstances that the future may put up as obstacles to be dealt with.  things are in flux, and will no doubt remain so for a while yet.  The fact that I am also going to be running for the Legislature again in 2022 means I've had to postpone the trip a month so that I would be here campaigning in the weeks just prior to the Primary election instead of being out of touch with the campaign during a critical time.  I have faith that things will work out as they should.  Whether that is how I want things to be or not, I just need to be prepared for as many possibilities as I can.  Without trying to be prepared for every possible scenario, which would overload the bike and make the whole trip a burdensome adventure.  I'll keep you all posted.

Catch you on the road sometime...

Since I know that I will be camping at least half of the time during this trip, I know that I will have to pack camping gear that can be loaded onto the bike.  Some I already have, and I am going through and acquiring more that will be of better use for on a bike than what I may have.  I am still going through things I have and deciding what I need, and what I don't.  The tent is rather old, but still in good shape, and is easy enough to put up and take down, and stores one the bike easily enough.  I have picked up a new folding entrenching tool, a new knife, and a folding solar-powered LED lamp that I can pack under the cargo net so that it can be charged during the day as we ride.  I have also bought a new hatchet to replace the old heavy one I keep in my camping box.  It will be much lighter on the bike than the old one and on a long journey, the light weight will be a benefit.

I have a sleeping bag that is suitable, and an extra blanket rolled up with it for any nights that might require a little more warmth for these old bones.  Clothes I am not too worried about, as the Navy taught me how to fold things small enough to leave plenty of space, and I will have plenty of time between now and the time we leave to get anything I need if something wears out.

The one thing I am looking for is an old-style mess kit.  The pan, plate, and utensils are self-contained and small enough to easily fit into a saddlebag or my old seabag strapped to the sissybar.  A small backpacker's stove and fuel are on my list to buy.  But beyond that, at least at this point, I have everything else I will need for a long 14-day long road trip.  Although, as I continue to get closer to our departure date, I am sure I will find something that I just can't do without, or that I have to replace something I already have.  I am sure I will find things in my first-aid/survival pouch that probably needs to be replaced.  But I will deal with that when I go through it in the coming weeks.

It's funny, but the more I get things ready for this trip, the more excited I become for it.  It is going to be an adventure and with my grandson, and friends who have said they would like to ride along for at least part of it, it ought to be one to remember for the rest of my life.

Catch ya on the road sometime...

Roadtrip 2022-Nick's Chopper Is Up

Yesterday, Nick and I made a 4-hour roundtrip from Morton to Yakima, Washington to pick up a voltage regulator he needed for his chopper.  Even though the sky was blue, and it was beautiful out, it was still only in the low 30's when we left Morton.  By the time we had made it to the top of White Pass at 4,500 feet elevation, it was 19 F, and we were both glad to be in Nick's nice warm Subaru WRT.  We made it down to the frigid and arid eastern Washington town of Yakima and he purchased his voltage regulator.  Both on the way over to Yakima, and the return trip back over the Cascade Mountains, Nick was describing what he wanted to do with his chopper "Shock Therapy" so that he could take it on the run to Chicago with me next year.

He is planning on installing a dual bag air suspension system for his seat to make riding the rigid framed chopper easier over the 5,000-mile distance.  Also, he is going to work on getting everything rewired and repainted as part of the package.  I was happy to see how into making this trip with me that he has gotten.  I am still going to be getting Gypsy ready, just in case, as well as Tennessee Whiskey.  But more on them later.

When we got back to Morton, we replaced the voltage regulator, and Nick rerouted his fuel line to get a little better flow rate.  Then, he rolled Shock Therapy out of the garage, and I climbed on Tennesse Whiskey.  Even though the sun was just dropping behind Peterman Hill, and the chilly temps could already be felt dropping, we rolled out for a circuit around Morton before topping off his tank and going out for a little test ride.  Instead of telling you how things went, I'll let the YouTube video I created last night give you a better idea of how things went.  I hope you enjoy.

This is going to be a fun trip.  One I can tell I am going to enjoy making with my grandson.
Catch you on the road sometime...

RoadTrip 2022- Parts Are Coming In 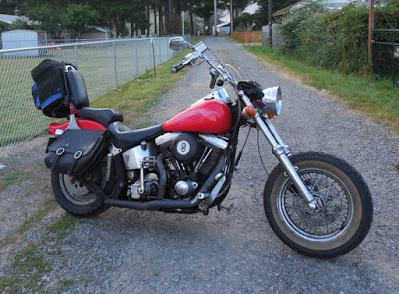 As the time begins to creep closer to the ride beginning, the parts have begun to arrive to get the preparations moving.  Today, I received a new kickstand/footpeg/gearshift mount that should solve that issue with Gypsy.  Then it should be a simple case of replacing the starter breaker, and she should be ready to ride.  From there we can look at what needs to be done to her to get her roadworthy for the trip.  After Gypsy gets this bit finished, she will be temporarily replaced on the lift by Tennessee show she can get a new tire mounted. 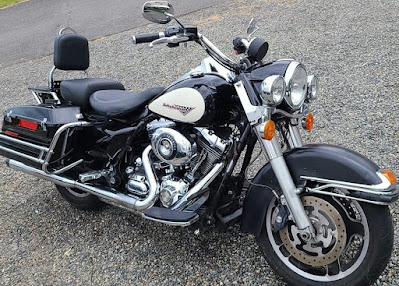 I have also begun to gather up things for the trip itself.  On Tuesday. I received a new trenching tool, fire starter, and folding solar-powered LED lantern.

The basic camping gear is already set, for the most part.  I am going to look for a couple (metal) mess kits for cooking with.  Along with a small single burner stove for cooking and making coffee.  Pretty much everything else is good to go.

Things are looking good so far.  At least on our end.  I am truly worried about some new travel restrictions coming down that would limit the ability to make the ride on the limited schedule we have.  But so far, so good.  This is looking to be a historic trip for Nick and me.

Catch ya on the road sometime...